Finally — the first “honest” ad from a “cable company.” (he said with his tongue planted firmly in his cheek) 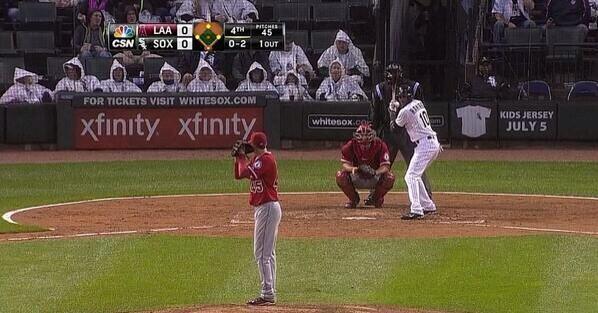 During a rainy game last week, the Chicago White Sox tried to do the right thing by fans at US Cellular Field (I still want to call it Comiskey Park, no matter what!) and gave away white rain ponchos.

It didn’t come out that way. Television images of fans at the game with the ponchos on, looked for all the world like a modern-day Ku Klux Klan rally.

I’m sure somebody in the front office was left slapping their heads and giving the Homer Simpson “D’oh!”

Yep. You read that right — Brandon Routh, who most fans know as Superman from the abortion that was ‘Superman Returns’ is joining the cast of the CW hit ‘Arrow’ (as in Green Arrow) to play scientist Ray Palmer, the new head of Queen Consolidated.

For most folks, that name doesn’t mean much, but for fanboys like me, Ray Palmer is The Atom — a scientist who developed a way to miniaturize himself, don a costume, and — say it with me — “He fights crime!”

According to Ain’t It Cool, Routh has been signed for 14 episodes. No word on how they will incorporate the superhero aspects into the series, but no doubt they will be in some fashion. Some fans are noting that if they actually follow through with making Palmer The Atom they will predate next year’s Marvel motion picture ‘Ant Man,’ which also features a shrinking superhero.

That film, if production ever kicks into high gear, is set to be one of the first to be filmed at Pinewood Studios Atlanta, the brand new facility built out in Fayette County.

The ‘Arrow’ season premiere is October 8.